YPB, who provides anti-counterfeit technology targeting Australia, South East Asia and China, was granted approval from the ASX earlier this year to run a token sale on the exchange.

For the cryptocurrency-averse, there’s a Canadian blockchain exchange-traded fund in the works that will be anchored by less venturesome investments like Walmart Inc.

This year’s selloff in virtual currencies has done little to dent investor enthusiasm for initial coin offerings, which attracted a record $US12 billion in the first half.

That’s up from $US7 billion for the whole of 2017 and a more than 50-fold jump from 2016, according to Autonomous Research LLP.

Aiming to capitalise on the fast-growing cosplay market, Cure WorldCosplay has launched a crowdsale for the cosplay community.

Cosplay is a multi-billion dollar industry where fans dress up as their favourite fictional characters from anime films or Japanese manga.

As more and more industries begin to shift into the ever-growing world of blockchain, it was only a matter of time before real estate followed suit. Based out of Japan, DexisChain bridges the gap between real estate, technology, and innovation by creating a universal real estate market prediction platform using blockchain that will increase transparency and lower the barrier of entry for the average investor.

The new eco-friendly marketplace enables users to back eco-friendly ideas, projects and products through a Save Environment Token (SET).

South Korea’s dominant message-app operator is considering a private placement next month to raise funds from partners interested in helping to build its crypto platform.

Ground X Corp., a blockchain subsidiary of Kakao Corp., may initially seek capital and business alliances with consumer-service companies, Jason Han, the unit’s chief executive officer, said in an interview. Ground X is targeting firms that, like Kakao, have internet or mobile services that could be offered over a blockchain platform, he said. Plans are still subject to change, Han said.

The chairman of the US Securities and Exchange Commission (SEC) said in a video interview with CNBC that cryptocurrencies such as Bitcoin would not be considered securities by the SEC.

SEC Chairman Jay Clayton said cryptocurrencies, which acted as replacements for sovereign currencies, were not a security, however he believed blockchain technology was still promising.

Beware of the EOS whales.

The top 10 holders of the digital tokens from the largest initial coin offering ever own nearly 50 percent of the coins, according to tracking service Etherscan. Block.one, the private company behind the project that completed the more than $4 billion offering last week, is the biggest holder, with 10 percent of the total. The names of the other large holders are anonymous and could be individuals or even exchanges.

Often called whales, large owners can hold much sway over the coin’s price. Any potential coordinated moves could put smaller investors at a disadvantage. During its almost year-long ICO, the price of EOS Tokens have rallied about 13-fold, and now has a market capitalisation of about $12 billion, according to CoinMarketCap.

This article first appeared on Bloomberg.

Amazon Web Services rival Dfinity has announced it will distribute approximately $US35 million worth of tokens for its cloud based Blockchain platform.

Dfinity president and chief scientist Dominic Williams said the airdrop would increase the distribution of tokens before the network launched. 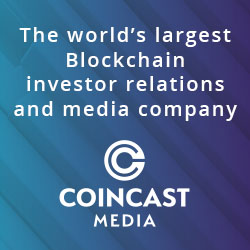